skip to main | skip to sidebar

I tend not to put up pictures here unless they are original. So a closeup of the wall of my house. 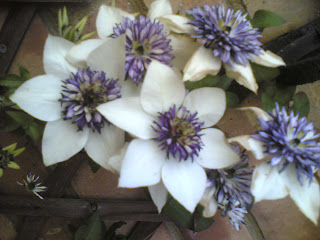 There are four national "broadsheet" newspapers in the UK, the two biggest selling have a largely conservative anti-European leaning. I'll quote one article from each.

From The Telegraph: Almost nine in 10 new jobs created over the past decade have been taken by foreign-born workers despite a sharp increase in the number of skilled British workers, official figures show.

From The Times: Market experts estimate that about 90% of the plants on sale this Easter weekend, whether in DIY chains such as Homebase or in specialist nurseries, have come from overseas.

The Telegraph article throws out the slightly xenophobic sensationalist headline without examining it closely. Very tabloid. It suggests that you (or I) could not be both "foreign-born" and also "British".

The Times article does suggest some further explanation:

The scale of the shift is illustrated by sales of clematis. A series of strains developed in a Polish monastery now dominate the market. They were created by Brother Stefan Franczak, a Polish Jesuit monk, who started breeding clematis in the 1960s after finding seedlings in the garden of his monastery just outside Warsaw.

Franczak’s work was part of a much wider interest in plant breeding that helped create a network of renowned laboratories across eastern Europe.

By contrast in Britain, this coincided with Margaret Thatcher’s decision in the 1980s to slash Britain’s investment in such laboratories — which led to most of Britain’s plant-breeding centres being sold off or shut down.

This note started with an observation of the coincidence in the foreign fraction, and amusement that Frank Field was the source of the jobs article. But the pun didn't quite fit in.

What is this all about?